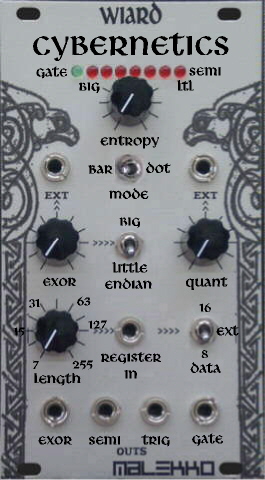 What calling it a "Cybernetics" module with an "entropy" control isn't self-explanatory?

Why is it and what?

First, yes it is the expander module for the Noisering.

The reason it exists is because I figured out another algorithm that can run on the same set of hardware. The mathematics of information theory as applied to music predict that it is possible that some portions of this new algorithm MAY have musical usefulness.

That is all we had to go on the first time, so what the heck.

Our story begins with the "Quantized Random Voltages" section of the Buchla Model 266.

It was absolutely essential that the Noisering NOT be a 266, because Mr. Buchla had done that already, so repeating his work would not advance the state of the art.

I did however incorporate the 2^N and N+1 output structure. But there is no psuedo-random sequence generator (PRSG) in the Noise Ring currently.

A PRSG is one kind of way to control the contents of a shift register. And if you grew up on Don Lancaster, only a maximal length PRSG is desirable.

Then I find a paper by Ralph Burnams "Harmonic Content of Sub-Optimal Psuedo Random Generator Sequences". And it turns out that that the original CD4006 implementation of an optimal PRSR is only one of a spectrum of solutions, each of which has a unique audio harmonic signature.

So there is one way to spice up Mr. Buchla's original algorithm, add voltage selectable sub-optimal sequence control. So the length control selects sequences of 15,31,63,127,255 under voltage control. They values are shown on LEDs. Don't worry, beat one of the repeat is at 16, 32 etc.

In beta testing the good Dr. Mabuse (aka Mike Murphy) detected that any static sequence sounds, well, static. HOWEVER by dynamically modulating the count length, you got an effect at some settings, that were musical "keepers". That is a good enough recommend to me that I am willing to go ahead with the rest of it. "Sometimes the Universe gives you clues about your destiny, you should listen"- George Clooney

OK, so we have something new for sequence control and animation in the audio domain, what about as a controller?

The "quantization" knob on the 266 is just Shannon's Measure of Information Entropy. Which is just "how many levels in the signal, expessed in bits, dude".

Now if we make each level be the 1 volt per octave voltage of a semi-tone, we have a musically quantized output. But if we copy the 266 design exactly, then we can only control the entropy from big to small. What if we want to control it from small to big, like an expanding range of semi-tones.

So we need an "Endian" control. Technically that is the term for the order of bits. Microsoft being the reverse of MACs (of course).

The "Gate" and "Trigger" circuits came from "Musical Applications of Microprocessors" by Hal Chamberlain.

Here's a block diagram, the bar/dot switch was a dud and has been dropped. 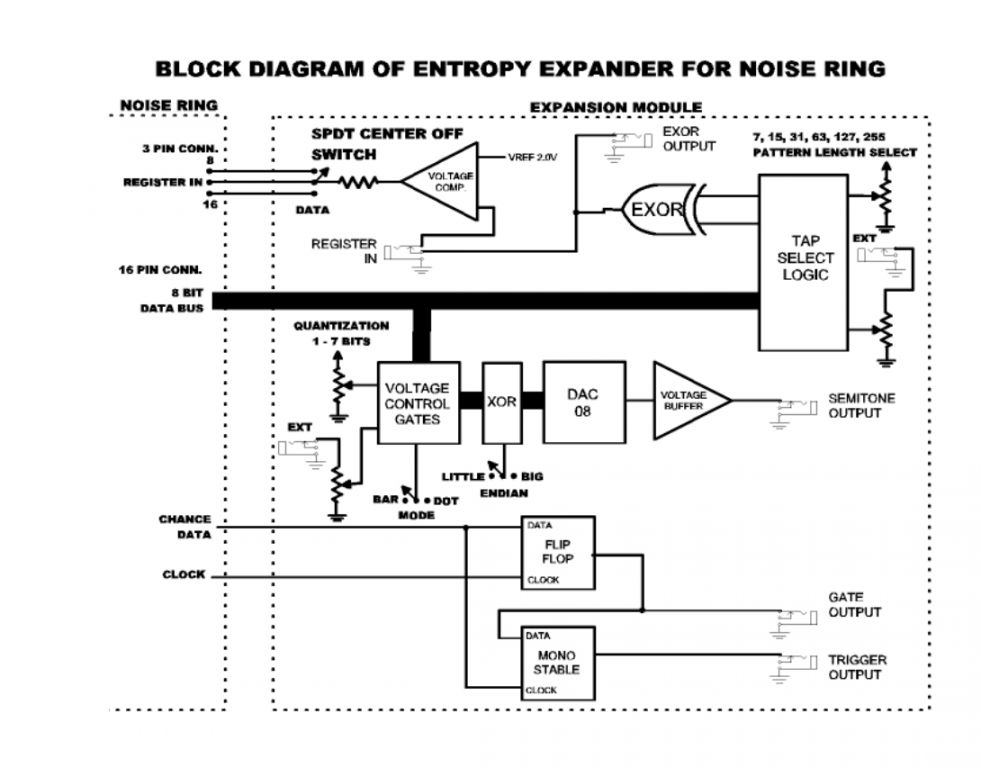