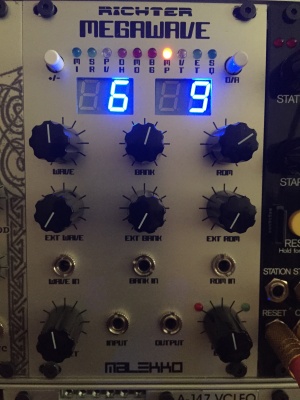 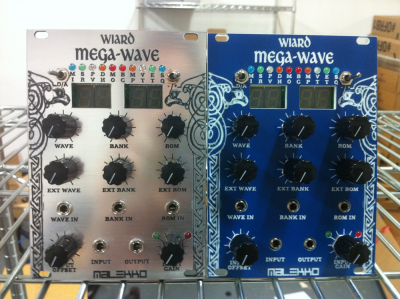 The Megawave features 2,560 waveforms arranged as 10 ROMs of 16 Banks per ROM, with 16 Waves per Bank, providing many of the available preset Wiard Miniwave ROM waveforms. ROMs, Banks and Waves can all be selected manually or scanned with control voltage (e.g., with a sequencer, envelope, joystick or random voltage generator), and each CV input has a fine control EXT pot. 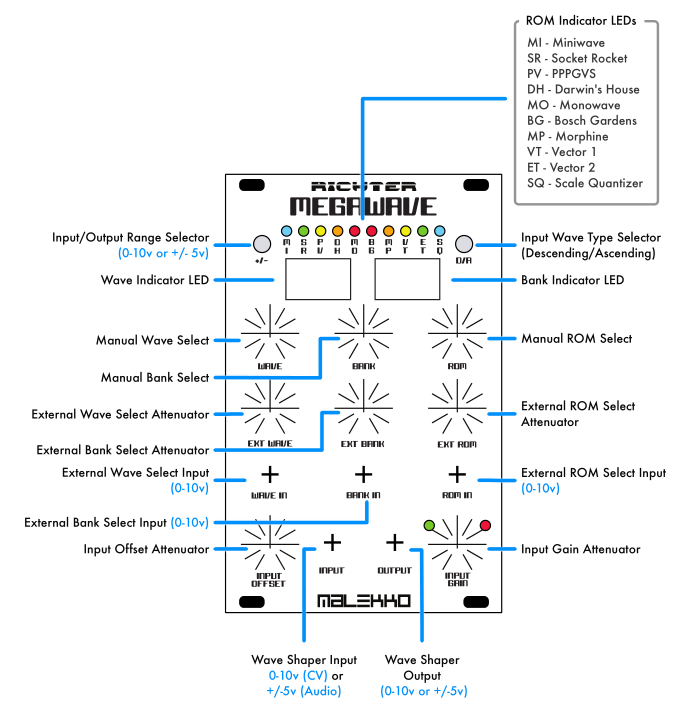 In the control voltage range, it can act as a control voltage quantizer (into 16 pre-programed music scales) or as a virtually unlimited source of smooth and stepped control voltages. In 0-10 volt mode, the input accepts 0-10 volts and Wave selection follows the sum of the manual and external wave select voltages, without regard to the input signal. The module output is between 0 and 10 volts depending on the number stored at the ROM address pointed to by the input voltage.

In the audio range the module can function as a waveform wavetable playback device or as a nonlinear distorter to add harmonics to a sine wave. It can also process any audio signal pre-amplified to the +/- 5 volt range. In +/- 5 volt mode, the input accepts +/- 5 volts and Wave selection is only updated at the zero crossings of the input waveform. If the input is a raising sawtooth and the internal waveforms are developed with that in mind, the wave will only progress at the zero crossing points and remove “clicking” from the wavetable sweep. The module output is between -5 and +5 volts depending on the number stored at the ROM address pointed to by the input voltage.

The Input wave type selector makes it possible to pair the Megawave with oscillators which produce ascending or descending sawtooths (such as that produced by the Richter Oscillator).

The input voltage ranges for the external Wave, Bank and ROM select are always 0-10 volts. Fine tune your input with the EXT control knobs.

In +/-5v mode, the Input Offset is designed to adjust for optimal audio input to achieve minimal distortion based on the VCO used.

Finally sat down and figured these all out. To replicate the results, tune your osc. to C at 0v going into the megawave.

Bank 0-11 Each bank's starting note is a chromatic step upwards starting with C at bank 0 and B at bank 11. The wave specifies the scale as follows:

For 12-15 the "scales" are just 3 notes. I've just marked what the notes are for bank 0, they're transposed just like everything else for the other banks.

In case you're curious, some of this took some internetting on my part, as I hadn't heard a couple of these before...

Bank 12-14 These banks sort of do the inverse of the first set of banks. In this case the wave selects the starting note chromatically starting with C at wave 0, C an octave above at wave 11, and all the way up to the next E at wave 15.

The bank specifies the quantization as follows:

This bank has some misc stuff in each wave, I've put the starting notes in parenthesis:

not sure about the following :

Grant: Notes on the Megawave.[modifier]

Back in history there was a device in the Digisound 80 called the “VCDO” or Voltage Controlled Digital Oscillator. This was a CEM3340 run into the low radio frequencies and diving a 5 bit counter (32 byte waveforms) and there were 4 banks of 8 waves.

I realized that a raising sawtooth into an analog to digital converter could work as an address generator. And the Waveform City was born. Darwin Grosse kindly wrote the Wave256 software and authored the first ever wavetable called “Darwin's House” which contains the now famous “foxbat” and “neckbrace” waveforms.

At some point we realized that offering the waveshaper from the Waveform City by itself would be a cool module and could be used as a processor and quantizer and Morse code repeater for you steampunks.

Like an angel descending from Heaven, John Blacet volunteered to put them into production and about 800 are in the field under the name Mini-wave.

Bruce Duncan has a version also.

In the meantime Dave Hylander volunteered to make an expansion board for the Mini-wave to hold 9 extra EPROMs. He also very cleverly used a 10 segment LED drive as a voltage controlled ROM select.

Then Matthew Davidson of “Volta” fame, decided to write 5 ROM wavetables for the expander.

And Paul Maddox made the Monowave wavetable available.

John Blacet was given first right of refusal, he declined and sends his best wishes for the Euro version.

What's new in the Megawave?

We brought the input gain and offset controls to the front panel and added overflow and underflow indicator LEDs and and Inverter for descending sawtooths like the Oscillator. It should be usable with any VCO sawtooth except a Buchla 258 (which has a unique waveform where the sawtooth has a “divet” in it).

By far the largest number of complaints was, well let's just say musicians in general don't read binary. So we put some nice big blue 0 – 15 indicators on the front. Bye-Bye Binary.

The Miniwave addresses the particular ROM wave using an ascending saw – this means you can run any audio-rate waveform into a Miniwave and it will “track,” but with varying timbres. For example, running a pulse wave into a Miniwave won't change much – it may get a bit grittier or whatever, but generally it will be very subtle if noticeable at all. Triangles and sines will yield more significant timbre variations, but a sawtooth is the ideal waveform if you're hoping to use the Miniwave as a wavetable oscillator and not just a timbre modifier. So generally the closer the input is to the edge/ramp of a saw the closer the output will be to the programmed waveform.

The Miniwave (and Megawave by extension presumably) can also process CVs. The Miniwave had a 0-10v/+-5v switch which allowed you to select an optimal input range for processing CV or audio – I'm assuming that since they brought the Miniwave PCB's Offset/Gain controls to the panel of the Megawave the two switches up top now offer different functionality. I'm guessing the Descending/Ascending functionality Josh mentioned has to do with the way the waves are addressed, meaning you could switch the addressing between an ascending saw (the Miniwave's standard) or a descending ramp. This would also effect how it sounds as a timbre modifier, especially for complex sources like samples or drum machines.

Being able to cycle through all of the ROMs is a huge improvement over the Miniwave, as before you could only swap between two ROMs at a time and only via a physical switch. You could replicate the Megawave functionality by using the two Hylander Expander and CV PCBs plus an extra panel to house the new functions – in other words, an extra $150 or so and a good deal of DIY. Then you would need to buy the extra ROMs as well, which went for about $20-$30 each – in other words, another $200-$300 on top of all that. Some ROMs are more impressive/dramatic than others, and having them all at your fingertips like the Megawave is a big plus. Chances are people will each find their favorite few out of the bunch as they use it and gravitate towards them for particular uses.

i wish i could simulcast my modular right now. and i need to go to bed to get some sleep. i won't be able to sleep over this thing though. life the universe and everything. the answer (currently) is: 2 lfos>miniwave bank/wave cv. miniwave audio out>diode filter being modulated by mankato as lfo. period. endless hours of enjoyment.

KS, yes, moving from wave to wave via CV is smooth for *some* banks of *some ROMs (Morphine for every bank, others not so much). And the Vector 1 and Vector 2 are aligned for wave AND bank. You can joystick around the 16×16 matrix and it's smooth in every direction.