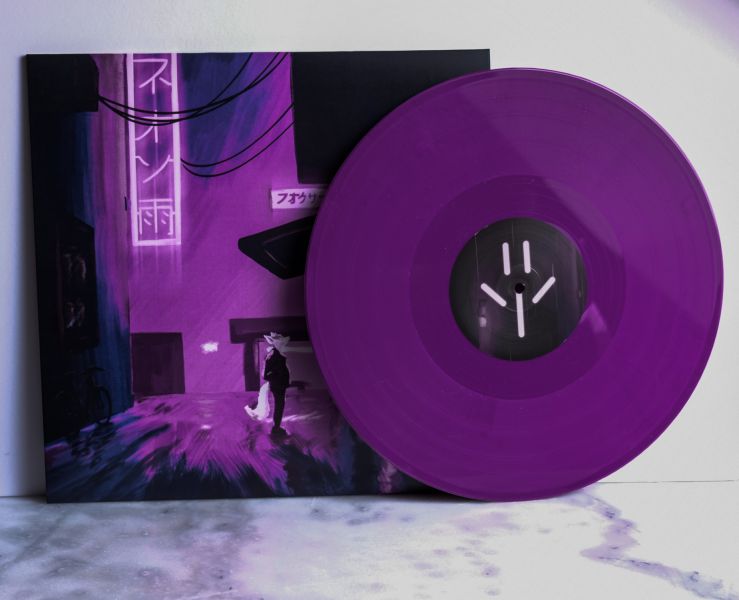 Jon shares an exploration of the beautiful, emotive simplicity of one of the top Dreampunk albums of the year.
Enjoy!

Imagine walking down a city street at night. Neon signs saturate the landscape as rain steadily falls. A distant figure smokes a cigarette under an awning, their features obscured. Sirens wail in the distance as we continue our journey through the rain. This scene and many like it are what enter my mind as I listen to F0X3R's (Fox’s) latest album Neon Rain.
Coming from the Future Garage scene, Fox has a significant change in style with Neon Rain. He described this change as “needing something new in my style of music, so I decided to change it by taking inspiration from my favorite album, Birth of a New Day (2 8 1 4 - 新しい日の誕生).”
What Fox has accomplished on Neon Rain is taking the essence of dreampunk and distilling it down to one of the purest and finest representations of the genre. This is the type of release that you point someone to when they say, "What does dreampunk sound like?"
The musical arrangements are simple, yet hide subtleties that are only fully understood after repeated listens. Looking at the opener Electronic Birth,on its surface it's merely a three note melody repeated for a few minutes. However, when we listen closely we start to notice the smaller, finer details that are hidden deep in the mix.
Do we hear the distant sounds of a city street? What is that phased sound slowly growing in the background? Do we hear someone walking over gravel? How many layers of synths are there towards the two minute mark? By my count there are at minimum 5.
All of these intricacies are found on each track, and they provide depth to a deceptively simple album. It's easy to just sit back and let the warm tones of the album wash over you, taking you to a city in the not so distant future. It is also rewarding to sit down and concentrate on the music and dig out the nuances that Fox has hidden deep in the mix. This highlights the true star of the show: the production.
The music is brought to life by the beautiful and emotive production that Fox has put together. It gives the album warmth and depth of character that would be lost in a lesser producer's hands. Every element is given room to breathe while not one component is overpowering.
The finest example of this is found on my favorite track, Lucid Dream. The music begins with sounds of a mall or checkout counter before a piano that resembles the start of BOAND chimes in. A strong bass tone enters in while the melody is maintained by a reverberated synth. During all of this, other background sounds are playfully introduced and taken away as if fading in and out of existence. The music has this quality where you don’t just listen to it - it washes over you with its tones and sounds. All of this comes to an abrupt end as the track suddenly closes with the sound of turning a tape deck off.
This abrupt ending to the song is not unique to Lucid Dream, as it is found throughout the album. Electronic Birth, Luminescence, Erased Mind, and the aforementioned Lucid Dream all end quickly and jarringly. I asked Fox about this and he explained, “I just listen to my feelings and when the feeling I am trying to describe in the music vanishes I try to transcribe that as best I can into the music.” He went on to explain that the album concept as a whole is a collection of emotions, and sometimes they end abruptly; he wanted to capture that in his songs.
What Fox has achieved on Neon Rain is nothing short of a masterwork. The richness and depth of the production truly brings all of these songs to life. I have listened to this album over a dozen times and I am still picking new things out at various points throughout. I hope that you will join me in celebrating one of the year's best releases, walking down those lonely sidewalks drenched in the sounds of Neon Rain.
Equipment Used
Fox used a Basics Virtual Synth and microphone for much of the album. Vocals on Luminessence and Neon Rain are performed by Fox, with additional vocals on Electonic Birth and No Signal being sampled. He also used an OP-1 to generate the synth pads and lead melodies along with borrowing his sister's Odyssey for 2-3 passages in the album.
Acknowledgements
Thank you very much to F0x3r for answering my questions about the album and for talking at length about it with me. Also the guys at Underwater Computing for giving me the opportunity to review this album prior to release. As always, thank you to Blissmonkey for editing and promotion.
Dreampunk Record Club
Jon Pierson